Over 5 years ago I became more serious about being more prepared in case of an emergency, in particular in cases of a long term emergency. I had always been a person that bought items that were on sale in bulk thanks to the teachings of my grandmother, so having a 3 months supply of foods we ate regularly on hand was a habit I had from the time I moved out on my own when I was 18 so that part of storing food for my family was taken care of. It was the long term storage of food that I needed to work on.   I first started by getting a years supply of wheat, beans, and rice and 2 weeks of water.  Once I was done with those items I added oats, dried apple slices, and soup mix. You can read about the importance of emergency preparedness in regards to food here.

As I was doing research into emergencies and in particular children in emergencies, I noted a trend.  The words familiar and comfort occurred over and over again.  In emergencies we need to keep things as the same as we possibly can.  I never in this time or since came across a 72 hour kit for children without some sort of sweet treat in them.  In times of crisis those sweet treats can become an uplift and familiar thing to a life that is thrown out of whack.  In our personal 72 hour kits we have sweet treats but in our long term storage we had nothing and as I did more and more research there really was nothing that lasted on your shelf for more than a few months.  I decided I would have a couple of snack bins that would rotate snacks for the kids but I still desired a long term solution.  I am not talking 20 years, I would be happy with 5 years.  I then started researching MRE's and the desserts they have.  They can last up to 7 years but lets be honest they are not that good and this would not be a familiar treat.  I can not tell you which MRE website I was on when I took note of something they had a chewy chocolate treat that was wrapped in a mylar wrapping but for $2.00 a pop I was not sold.  I looked into that chewy treat a bit more and it seemed to me it was a tootsie roll.  This is when I had an idea, an idea that might just work.

I went to Wal-Mart and picked up 2 huge bags of tootsie rolls for about 4.50.  I had some mylar food grade pouches and oxygen packets already(I recently found some mylar pouches(see picture below) and oxygen packets at Amazon and the great thing about the pouches they can be sealed shut with a household iron) and so my 5 year experiment began.  I dumped the tootsie rolls in the pouch added 2 oxygen packets for good measure(1 could work) and sealed the bag up.  I wrote the date on the front of the pouch with the item and then promptly hide them in with the pouches of beans(who would look there for tootsie rolls...haha).  I had no idea if this was going to work 5 years ago when I tried it but I thought it would be fun to see if it worked. 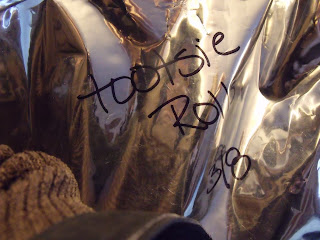 It is funny I forgot all about those tootsie rolls hidden in my beans for years, then we moved and with us came our food storage and the rediscovery of my little project...a little over 3 years had passed at that time and so back in with their friends the beans they returned again to be forgotten.  Then out of no where this past February I remembered the Tootsie Roll Project and was excited to realize March was a few days away and that would mark my 5 years and then I forgot about them again until one night last week I remembered them with great excitement so I ran down dug them out and ran them up the stairs(okay my hubby did that) and I relished in the moment of cutting that bag open to see what I would find.  Would they be hard as rocks?  Or loose their flavor?  Would they be a gooey mess?  Or in all hopes would they be perfect and I had discovered my long term treat?  I was so surprised they looked just like the day I dumped them into that mylar pouch. They were still the perfect tootsie roll chewy firmness.  Now for the taste...they tasted just like tootsie rolls taste.  My experiment worked.  I had found my long term storage sweet treat and my kiddos were excited too!!! 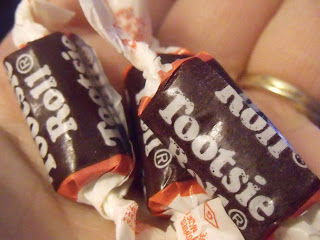